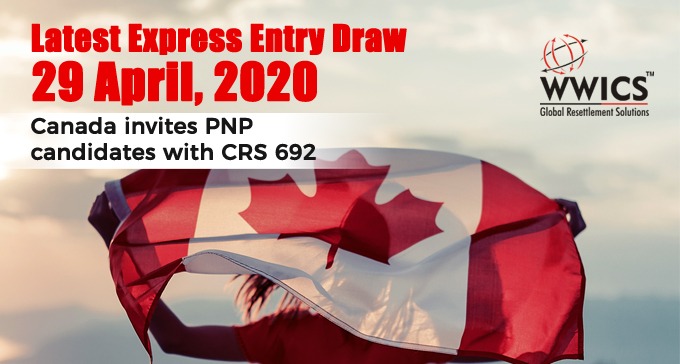 All these invited candidates had previously received nominations under Provincial Nominee Programs (PNPs). The provincial nomination awarded them an additional 600 points toward their CRS score, which means without the nomination candidate would have had a score of only 92.

The minimum CRS score drawn in this draw is the lowest for a PNP specific Express Entry draw held so far this year.

Despite the fact that Immigration Refugees and Citizenship Canada (IRCC) has to deviate from its regularly scheduled Express Entry draws after the federal government implemented special measures to curb the spread of coronavirus outbreak in Canada; invitations have consistently been issued to provincial nominees and Canadian Experience Class immigration program candidates.

IRCC used its tie-break rule in this draw and the time stamp used was March 11, 2020 at 13:46:21. This means that all candidates with a CRS score of above 692, as well as those candidates with scores of 629 who submitted their profile before this time received an Invitation to apply (ITA) in this invitation round.

In order to be considered for these programs, a candidate needs to first submit an Express Entry profile. All eligible candidates are entered into the Express Entry pool and are ranked against one another based on a CRS score, which assigns each candidate a score out of 1200 points on the basis of factors such as age, education, skilled work experience and proficiency in English or French.

IRCC then invites a set number of the highest-ranked candidates from the pool to apply for Canadian permanent residence through regular draws.

CHECK YOUR ELIGIBILITY TO IMMIGRATE TO CANADA ONLINE!!

World’s largest immigration group- WWICS brings you a special initiative to check your eligibility as well as process your Canadian immigration application online through our comprehensive online services. Get in touch with our immigration experts through various digital means!!