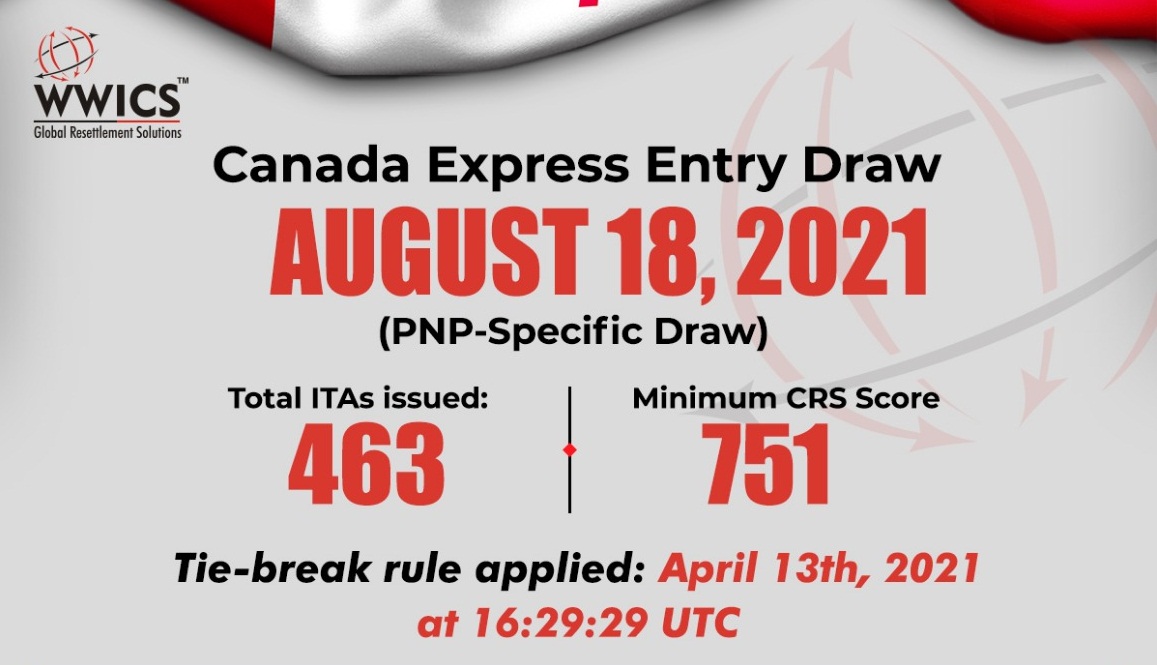 The Comprehensive Ranking System (CRS) score cut-off threshold for this draw was 751 points.

Immigration candidates, who obtain a nomination from an Express Entry-aligned PNP, automatically receive 600 points toward their overall CRS score.  This is the reason that CRS cut-off score for PNP-specific draws is usually high.

Immigration, Refugees and Citizenship Canada (IRCC) applied the tie-breaking rule and the time-stamp used was April 13th, 2021 at 16:29:29 UTC. This means the PNP candidates who had a CRS score of 751 or more and had submitted their Express Entry profile before this time and date, received an invitation to apply (ITA) in this draw.

Canada’s Provincial Nominee Program (PNP) is one of the most popular immigration pathways for skilled workers, international students and entrepreneur immigrants.

PNP enables participating Canadian provinces and territories to nominate a certain number of economic immigrants for Canadian permanent residence each year. A part of these nominations are known as ‘enhanced’ nominations that allow a province or territory to nominate candidates in the federal Express Entry system.

Express Entry candidates who receive a nomination by a Canadian province or territory are awarded an additional 600 points toward their Express Entry ranking score, which directly increase their chances to receive an invitation to apply for Canadian permanent residence in a subsequent Express Entry draw.

So far in 2021, Canada only conducted PNP and Canadian Experience Class (CEC) specific draws as these candidates are highly likely to be in Canada already. If go with the trends, there are chances that IRCC might hold an Express Entry round of invitations for CEC candidates within a day or two.

Canada has now issued total 102,779 ITAs through the Express Entry system so far this year.

Know your chances to immigrate to Canada under Express Entry!!

To find out if you’re eligible to immigrate to Canada under Express Entry, simply complete our FREE ASSESSMENT FORM ! A member of the WWICS team will review your eligibility and contact you to discuss your options!